True zone control of multi-zoned lumber kilns is not accomplished using traditional control methods due to the lack of a process variable that precisely compares zone-to-zone drying. During the initial drying period, drying is controlled by use of the coldside temperature. This is probably the best that can be used during the constant rate drying period; however, coldside control if continued into the falling-rate period is ineffective because it finally reaches the coldside temperature setpoint and steam flow will level off to all zones such that there is no closing of the gap between slower and faster drying. The drying curves will be parallel at the end as depicted by figure (1). 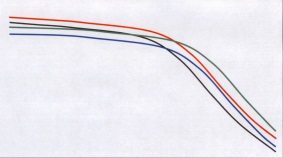 Figure (2) shows that use of true zone control will tighten up control by separating the zones at the fiber saturation point (FSP), so they can be controlled to converge throughout the falling-rate period of drying at the target.

Figure (3) depicts zones, delineated and distributed from highest to lowest drying rate on a horizontal time scale. It also shows that the base zone (lower MC) is the first zone to reach the FSP. As each remaining zone reaches its FSP, heat is applied proportional to the time between the base zone reaching its FSP and the time individual zones reach their FSPs, thus all zones are controlled to converge at the target MC. This method insures that the right amount of heat is applied to each zone at the proper time, thus eliminating the present practice of allowing the wettest (slower) zones to control total drying time which over-dries the lower MC zones and under-dries the higher MC Zones. Consequently, true zone control increases production rate by minimizing total kiln drying time, improves lumber quality by reducing drying-related defects, and saves energy as a result of the overall improvement. (Read Article)