According to a TAPPI study, CD warp occurs in corrugated board due to an imbalance in the moisture content (MC) between the top and bottom linerboards. To prevent CD warp, this report recommends 2% or less difference in MC be maintained between the two linerboards.

Efforts have been made to sense and control linerboard MC, but lack of suitable MC sensors and precise control algorithms has prevented development of a successful control system. Consequently, some manufacturers have resorted to using linerboard surface temperature (Ts) as a surrogate for MC; however, any correlation between between MC and surface temperature is lost as soon as there is a change in operating conditions such as temperature of the pre-heater, machine speed, etc. An improvement in MC sensing and control is needed to replace this non-theoretical method. Fortunately, a new theoretically-based MC SoftSensing and control system for webs such as linerboard and many other products, was provided by the first principles derivation of the Delta T Dryer/MC model:
​

For the special application of sensing and controlling the MC of linerboards from a pre-heater, the model relates the MC of a web leaving a pre-heater to the temperature drop (∆T) of the web as it cools. Figure (1) depicts measurement of the (∆T) for use in predicting the MC of the top and bottom linerboards. 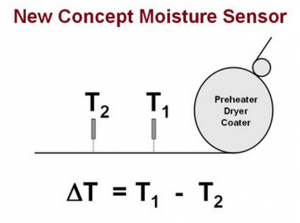 Knowing the MC of each linerboard enables the difference in the two MC to be controlled to 2% MC or less by adjustment of the wrap arms. This exclusive theoretically-based method is much more effective than use of surface temperature alone to predict MC. More information may be obtained from the complete paper, CD Warp Control System, by clicking (Read Article).